The Mini Bio:
Charity Tinnin’s fascination with dystopian lit began with Brave New World, and she's been a Captain America nerd for more than a decade, so it’s no surprise that her debut novel, Haunted, would be a YA dystopian with a dash of super powers. In addition to authoring the State v. Seforé series, she’s a freelance editor and semi-professional fangirl. Join her on Twitter, Facebook, Instagram, or her website.


The Short Bio:
Charity Tinnin’s fascination with dystopian lit began in high school with Brave New World, and she’s been devouring the genre ever since. Now, she works as a freelance editor and lives in the foothills of North Carolina—a terrain very similar to a certain series. When she’s not editing for a client or working on the State v. Seforé series, she spends her time reading YA and discussing the merits of Oliver Queen, Captain America, Frederick Wentworth, and Stefan Salvatore online. Speaking of the interwebs, Charity loves to talk about YA fiction, comic TV/movies/graphic novels, and State v. Seforé. Find her on Twitter, Facebook, Instagram, or her website to start the conversation. 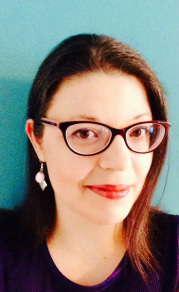 The Long Version:
While I don't want to literally test the theory, I feel confident saying I bleed books. From an early age, I read anything I could get my hands on. And to this day, I carry a book with me wherever I go, have twenty more in my to-be-read (TBR) pile, and can't walk out of a bookstore without buying at least one. In high school, this love for story birthed a desire to write my own. Cue years of frantic scribbling on scrap paper, in notebooks, and on a computer keyboard.

Speaking of high school, these years also sparked a fascination with dystopian fiction, courtesy of Brave New World, and I confess that I've been devouring the genre ever since. I just can't get enough. But I never planned to develop a dystopia of my own—until the day Noah Seforé walked into my head. Noah's brother Daniel followed quickly behind, determined to drive everyone else crazy. I tried to write several contemporary romances, but the Seforé brothers wouldn't leave me alone. Seriously, it got noisy in my head. So I jumped into NaNoWriMo and gave the boys a month to dazzle me or keep their mouths shut. Six weeks later, I had fallen completely in love and typed "The End" on Haunted, the first book in the State v. Seforé series.

I'm a graduate of North Greenville University, where I earned a B.A. and took five semesters of Greek as well as an advanced grammar and style class for fun. Yes, fun. In the last ten years, I've worked as a youth intern, a bookstore associate, and an assistant to several student ministers. Most recently, I had the privilege (and I'm not kidding) of wielding a red pen as an administrative assistant and editor for InQuest Ministries, a youth curriculum publisher.

During that time, my best friend and I stepped out in faith and decided to take our writing seriously. After years of writing for myself, a very select group of friends, and my online fandom friends, I went public. I called myself a writer. I bought and read craft books. I attended writers' conferences and had my work critiqued by professionals. I wrote devotionals for a local summer camp and joined ACFW, a professional publishing network. I also found a wonderful group of writer friends for the journey.

But in 2010, my life took what seemed like a downward turn. I contracted the "flu" but never got better. A year and a half, multiple doctors, and numerous tests later, I was diagnosed with Chronic Fatigue Syndrome (CFS). I wasn't sure what God was doing. My condition worsened until I could no longer work full-time, let alone write, and I had to make the tough decision to move in with family until I could find a way to live with my CFS. At this point, I seriously didn't like God's plans. However, in the last two years, I've been able to better manage my symptoms. Oh, and I've had the freedom to grow my freelance business as well as explore the traditional vs. indie publishing decision for State v. Seforé. Both of which I would never have had the time to do previously. Those plans of God's? I'm actually quite grateful for them now.

Currently, I live in the foothills of North Carolina, but you don’t have to travel the winding back roads to find me (and please don't try, that's a little creepy :) However, I love to connect with people via twitter, facebook, instagram, and email. I'll take any chance I can get to talk (read: fangirl) about YA fiction in general or State v. Seforé specifically. In the meantime, I'll just be sitting here at my desk mapping out the Elite's society structure, inventing new ways for Daniel to be delightfully snarky, working through that out of control TBR pile, or arguing the merits of my favorite heroes online.

Are you a comic geek, YA reader, or Team Seforé member?
I'd love to hear your thoughts, answer your questions, and, yes, fangirl with you. Find me here:
Twitter
Instagram
​Email

For rights inquiries, review copy requests, and information on scheduling an author visit or workshop:
Email

Copyright © 2016 by Charity Tinnin
Powered by